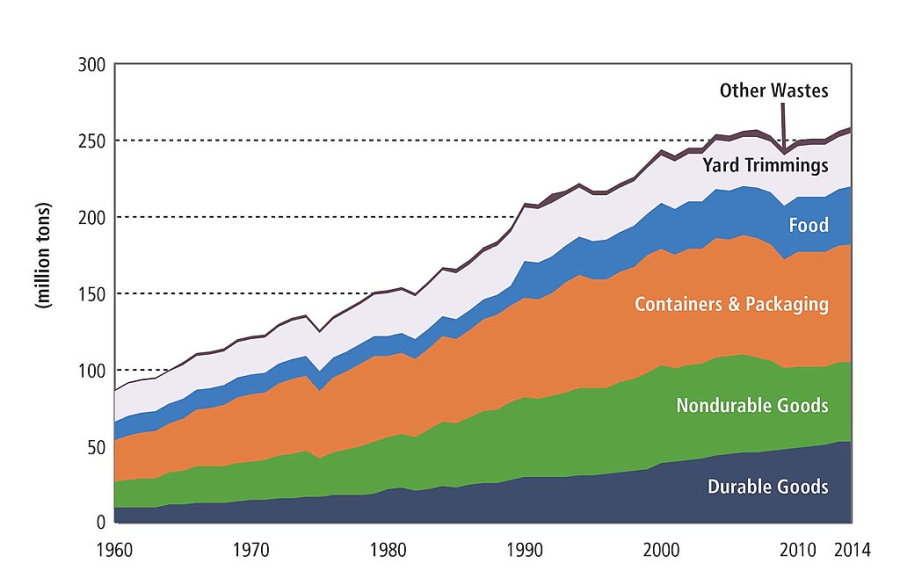 If we accept that markets result from the combination of the four major factors of needs, technologies, institutions and behavior of firms, that of waste in the United States is an additional illustration. First of all, and overall, institutional patterns different from those we know produce a different supply structure there.

History of US waste management

Then, the history of this US waste management sector over the last thirty years cannot be understood without permanently introducing the role of the rules and standards enacted by the public authorities; they emerge as a powerful structuring factor even if these markets at first reading seem to be driven by private companies.

Finally, if we examine only the firms, their history and their movements, the result that does not fail to strike is that of the very high speed of transformation of the offer. So many characteristics that invite us to once again leave our European benchmark.

We will successively present the institutions, the transformations of the offer and the trajectories of several firms which illustrate this tensional encounter between rules and markets. In the following issue we will exclusively present the case of Waste Management.

General rules different from what we know in continental Europe result in a different supply structure. With the exception of a few states (Colorado, New Jersey, Virginia, Washington), waste does not fall under the utilities regime, which means that it is not organized according to a natural monopoly.

A distinction must be made between the collection of household waste and the collection of industrial waste, transport, treatment by landfill or by incineration. The structure of the sector will depend on the organization of each link. What is the part taken by local authorities (do they collect? have they acquired landfills?) and what is entrusted to private companies in the form of franchises?

The latter are not always exclusive, so that at the beginning of the development of collection rounds several companies may find themselves competing in the same district. In other words, the absence of territorial monopoly, combined with local diversity, characteristic of American democracy, make the American waste industry a complex industry.

The institutional complexity resulting from an organization in…. It can be read as a flexible structure that crosses technical links (assembled in a specific way) and a territorial variable (a local distribution between public intervention and private firms).

US dumpster rentals and junk disposal

Originally, this sector was entirely the responsibility of the municipalities themselves, supervised by their charter granted by the states, and it was a very low-tech area. The growing awareness of pollution issues from the 1960s onwards led to new and growing intervention at the federal level with the establishment of increasingly precise regulations resulting in the technicization of the entire sector.

These public regulations have gone through cycles. In the 1960s under President Johnson, the federal Environmental Protection Agency (EPA) attempted to rely on municipal institutions with little success. Then industrial pollution shifted priorities towards programs targeting toxic waste and hazardous waste.

In the mid-1990s, federal policy once again focused on the municipal level, with the following priorities: air, household waste, industrial waste. These programs have been powerful incentives for firms.

The collection of junk phase represents between 70 and 90% of the sector’s total budget, compared to 30-10% for processing, which nevertheless occupies a large part of the attention and discourse. Its organization has changed little. This activity remains above all a labor-intensive industry even if compactor trucks have been developed, even if transfer centers exist.

Experts report that in Pittsburgh, it was not until 1984 that the collection of household waste was done entirely by containers and not by the collection of canvases loaded with garden waste; hermetic or mechanized collection has been slow to become established.

As a result, this service has always played a role in municipal employment policies in favor of minorities. Employees in the sector have alternately been Italians or Poles, then blacks from the mid-1960s to extend to Hispanics. This social dimension remains very important for the municipalities and for the trade unions; it is traditional to have a quota of jobs reserved for minorities.

Until the 1960s, therefore, waste management remained perceived as a local issue in line with the American tradition of being able to regulate one’s own affairs: the american city government is responsible. This intellectual background explains why, even in the event of recourse to private enterprise, the municipalities remained jealous of their competence; relations have sometimes been difficult; the contracts were signed for short periods.

So in this critical environment, companies have taken a long time to develop. We then understand the atomicity of the market and above all its instability characterized both by the disappearance of companies and a continual flow of new entrants.